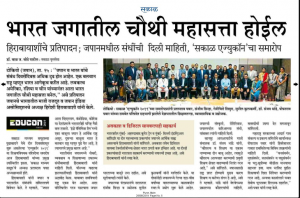 The conclusion of the Sakal Educon was headed by Mr. Prataprao Pawar, President, Sakal Media Group. This event was successfully held in Tokyo for the first time.

Hiroshi Hirabayashi said “India will be the fourth largest super power in the world”. He also talked about Cooperation with leisure and digital cyber.

The event was a great success and hopes to encourage cooperation in education between India and Japan.