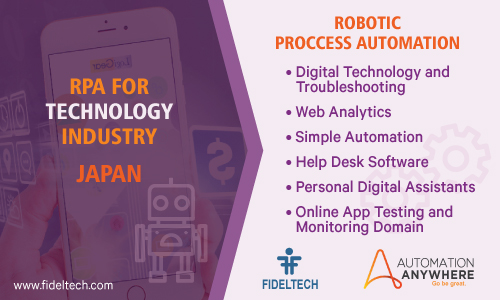 RPA has got to play a large role in technology, and in fact, it is doing so. Since technology has spread across all the dimensions of business, it is quite evident that every industry around the globe that applies technology to simplify its routine tasks, and in particular, if it is struggling with the resources and time guzzled up by the monotonous business functions, it would require automation, and if that’s in the form of RPA, it would be termed as modern! RPA has widespread applications on the technology front. A common example of this mobile app testing and monitoring, wherein Automation Anywhere has helped relieve a company in Japan of a major concern. However, there are other cases in other industries, wherein Automation Anywhere has played an instrumental role in helping them get through with a strenuous task. We will be looking at the case studies as well, but the need for RPA and the challenges and benefits of RPA are a couple of things that would precede it.

The Need for RPA in Technology

Technology is something that simplifies things, but RPA is another that takes it a level ahead. Here are some of the reasons why technology needs RPA. Of course, the application and the purpose of RPA would vary with the function that runs on a particular technology, but here are some common reasons why RPA is turning out to be imperative on the technology front as well.

RPA could have technical as well as administrative challenges. Here, we’ll enlist some of the common challenges associated with RPA in technology.

The Benefits of RPA in Technology Companies

RPA results in a lot of benefits, some of which are enlisted below.

Examples of RPA in Technology Industry

Japan, in particular, when it comes to Automation Anywhere RPA, has witnessed positive outcomes in the case of a couple of Japanese companies.

One of the reputed groups in Japan within the technology sector had concerns associated with the efforts incurred in the quality assurance function within the mobile app testing and monitoring domain. The implementation of Automation Anywhere RPA brought a considerable reduction in the efforts required to perform this function, thus also saving a lot of cost and time associated with it.

The same group had the same concern within the online app testing and monitoring domain as well. Automation Anywhere’s RPA had the efforts reduced, and increased the bandwidth of the resources for the more productive tasks.

Another healthcare company had concerns in the IT department, wherein migrating data from excel to the EMR (Electronic Medical Records) was a challenge. The implementation of RPA expedited the task and fostered annual benefits of around 130,000 USD.

In Japan, cities that have made it big in the technology (software) domain are Tokyo, Osaka, Fukuoka, Aichi, and Kanagawa. FidelTech is proud to be Automation Anywhere’s RPA associate in Japan, offering comprehensive services right from generating RPA sales, consulting clients on the requirement front, choosing the right RPA, process assessment, RPA execution, along with a strong RPA technical support to ensure that the process runs well.

Technology companies in Japan can implement RPA for tasks and processes like - Digital Technology and Troubleshooting, Web Analytics, Simple Automation, Help Desk Software, Personal Digital Assistants. For more information on Fidel - Automation Anywhere RPA services in Japan, get in touch with us.

Share your details to get the RPA solutions from Automation Anywhere with Fidel in Japan.